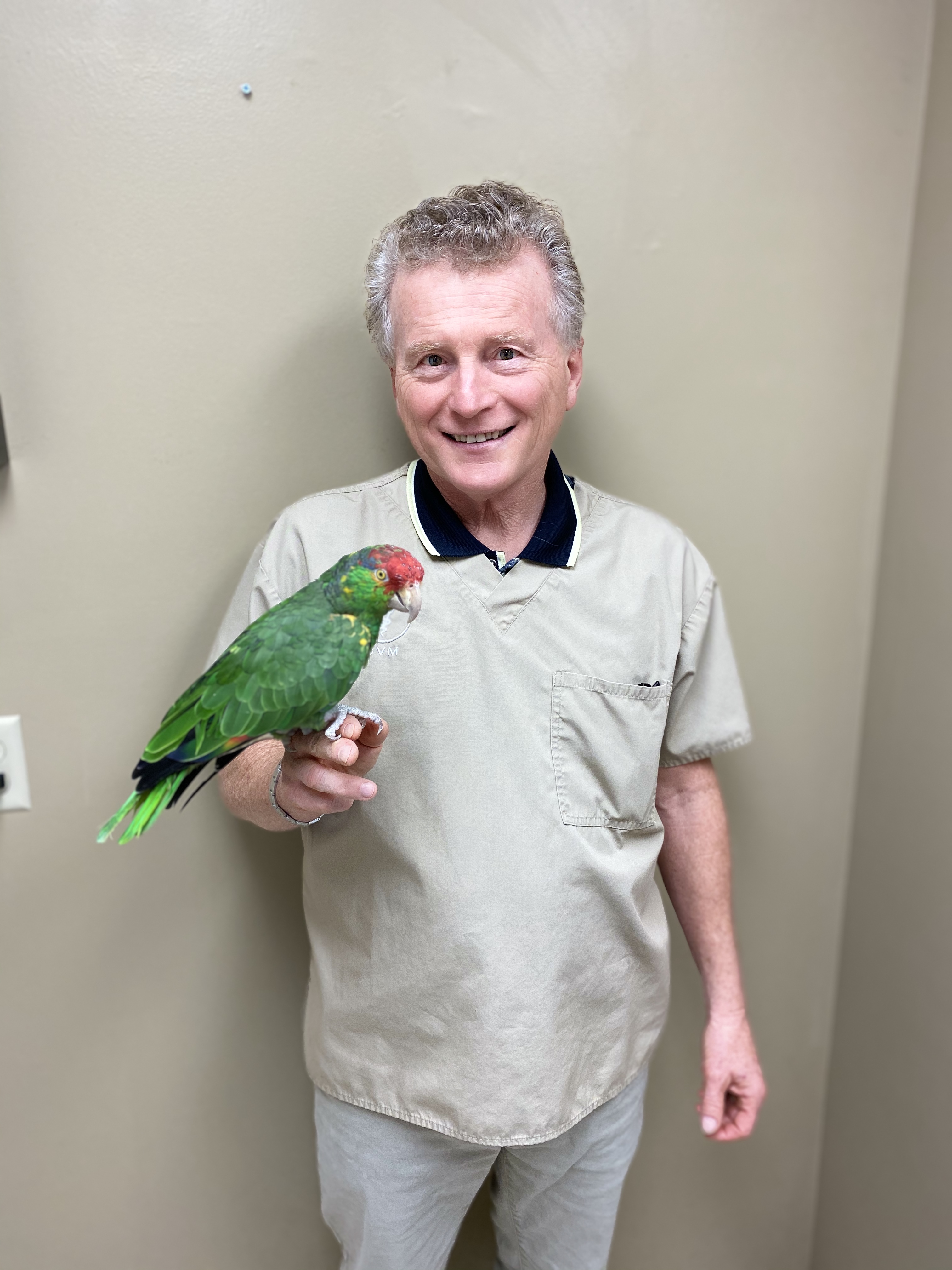 Dr. Wayne Beasley graduated from Michigan State University College of Veterinary Medicine in 1986. Dr. Beasley and his wife, Cheri, have lived in Williamston since 1984 and started Cedar Creek Veterinary Clinic in 1991 to provide quality, compassionate veterinary care to both small animal and exotic pets. Dr. Beasley’s special interests include treating avian and reptile patients.  He is a member of the Association of Avian Veterinarians (AAV), Association of Reptile & Amphibian Veterinarians (ARAV) and attends conferences on a regular basis to stay up to date on all of the latest medical developments. At home he enjoys his family as well as his dog, cats, stingrays, garfish, turtles and Koi. 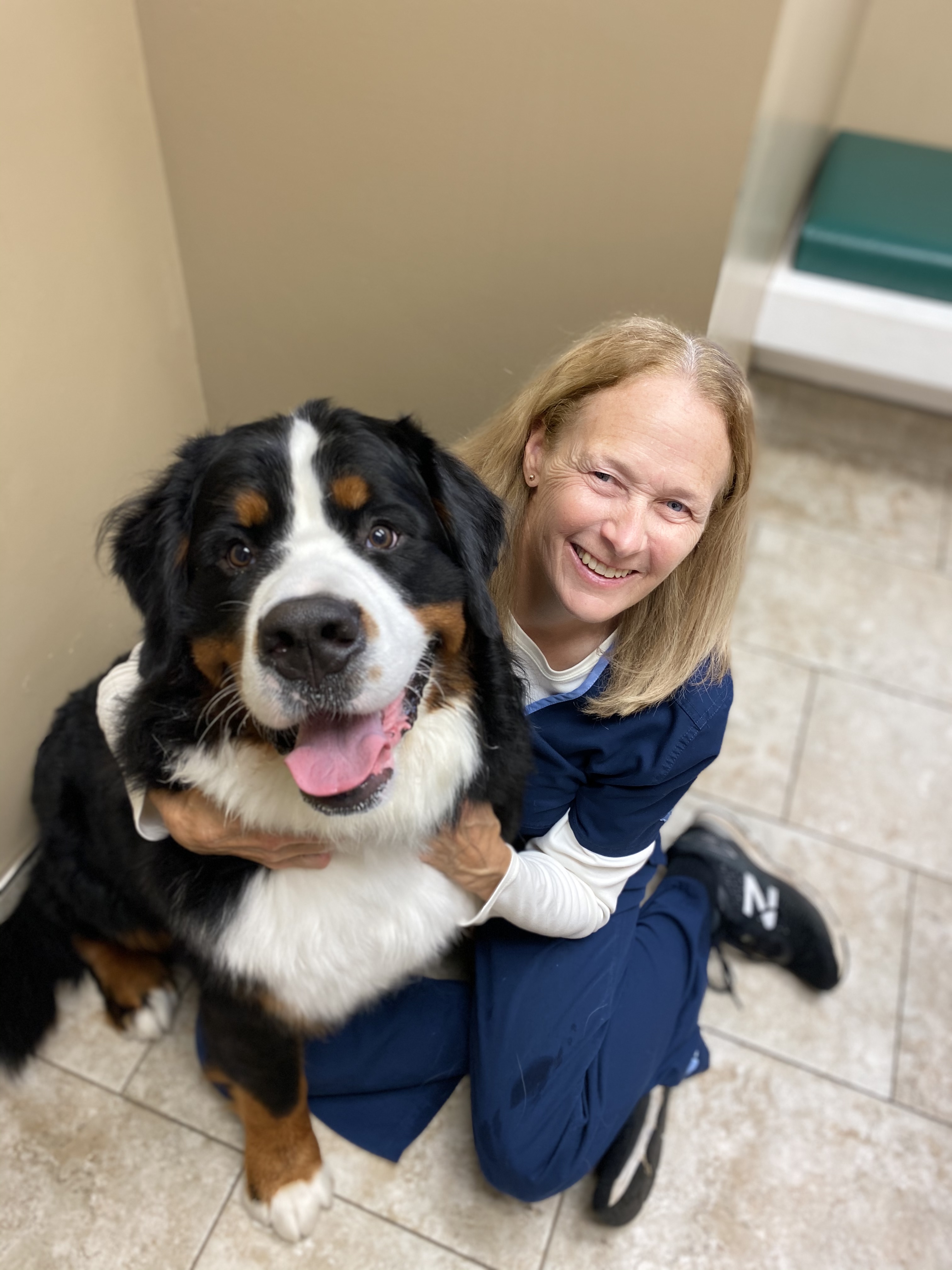 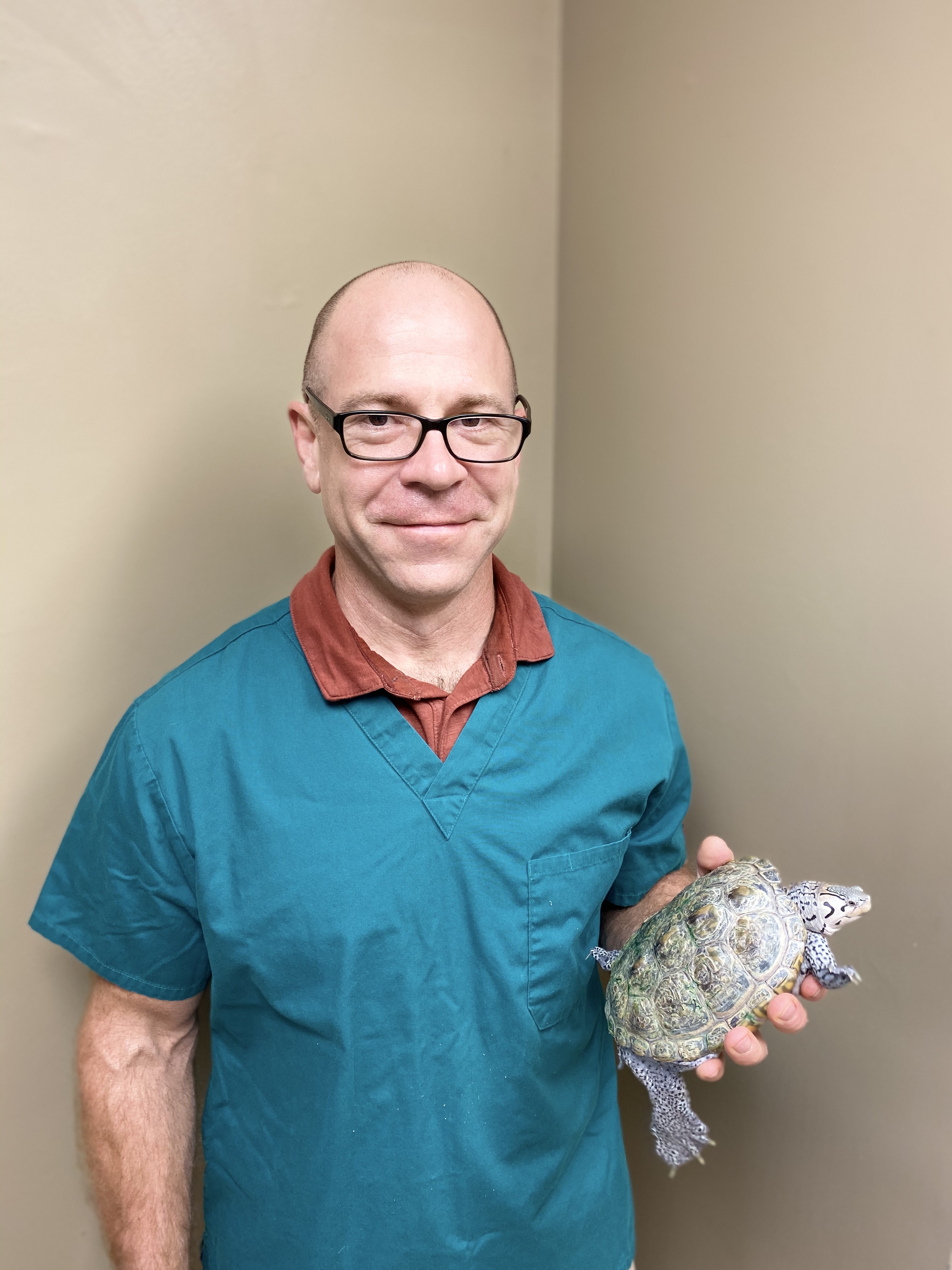 Dr. Derek Nolan graduated from Michigan State University College of Veterinary Medicine in 2000. He is one of our canine, feline, avian and exotic pet veterinarians, who is particularly interested in soft tissue and orthopedic surgery. Dr. Nolan has been a member of AAV since 2000. He worked at Cedar Creek prior to Veterinary School and came back in 2002. He has twice been voted Williamston’s favorite veterinarian. When not in the clinic, Dr. Nolan enjoys spending time with his wife Dr. Robinson, their two children, and his many aquatic turtles. 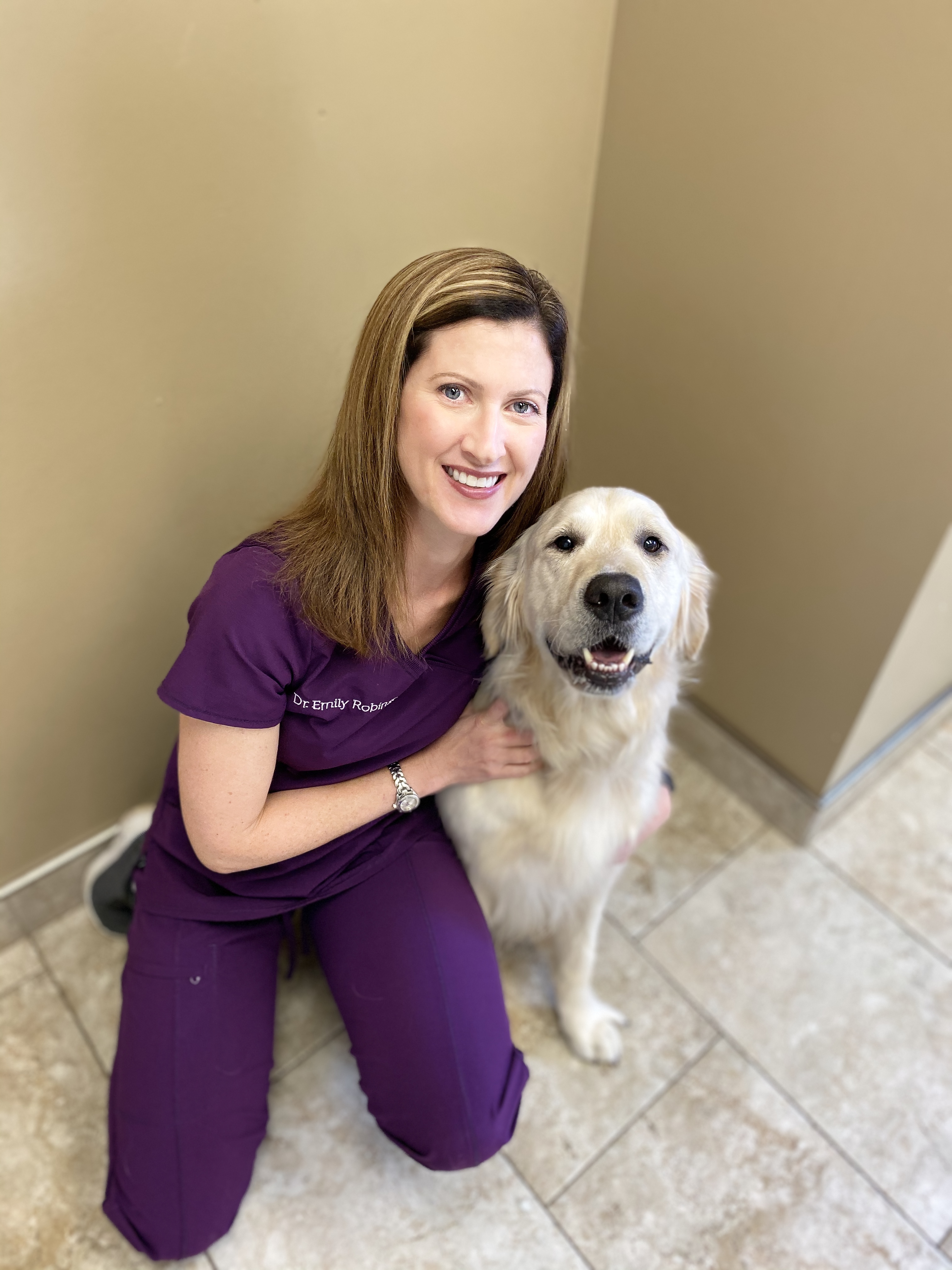 Dr. Emily Robinson is one of our canine, feline and exotic species veterinarians. She is a 2000 graduate of Michigan State University’s College of Veterinary medicine. Prior to joining Cedar Creek she practiced at a small animal clinic in Maryland, and has practice experience in both industry and academia. Her practice interests include cardiology, dermatology, internal medicine, feline medicine and animal behavior. Dr. Robinson is a member of the American Association of Feline Practitioners, the Michigan Veterinary Medical Association and the American Veterinary Medical Association. When not in the office Dr. Robinson enjoys gardening, reading, cooking, long walks with her dog and of course family time with her husband Dr. Nolan and their two children. 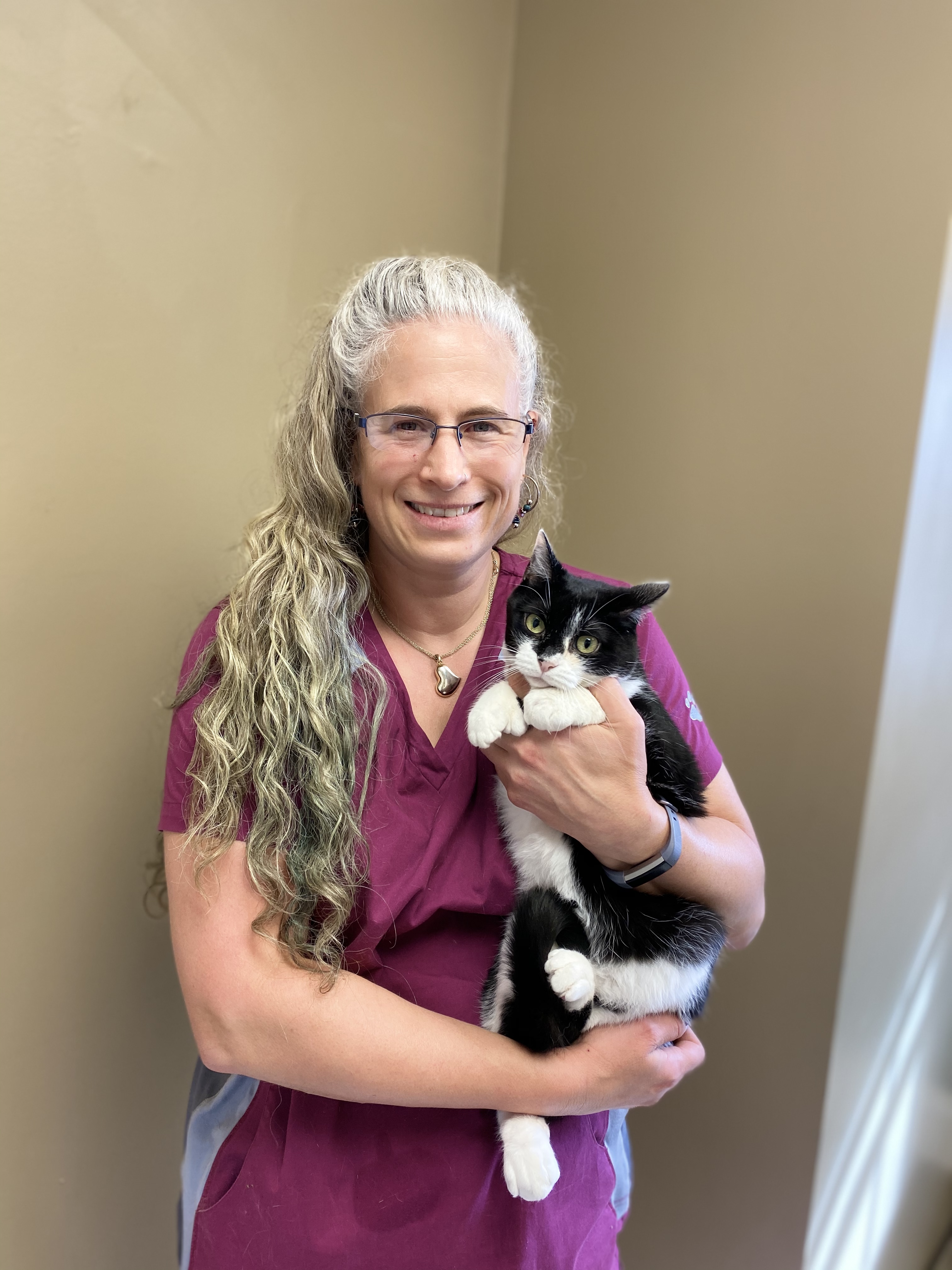 Dr. Maria Arnsman is one of our canine, feline, and small mammal veterinarians. She grew up here in Williamston and went to Michigan State University College of Veterinary Medicine. After graduating in 1996 she did a food animal internship and then moved to New York to practice veterinary medicine. In New York Dr. Arnsman gradually started to move from her large animal medicine background to a small animal medicine background. Dr. Arnsman moved back to her hometown and enjoys all the variety of species that come in on a daily basis. Professional interests include animal behavior and training, dermatology, helping to control pet population, and emergency medicine. In her spare time she enjoys sewing, crocheting, and cooking. She has a dog, many cats, guinea hens, and 2 Belgian horses at home. 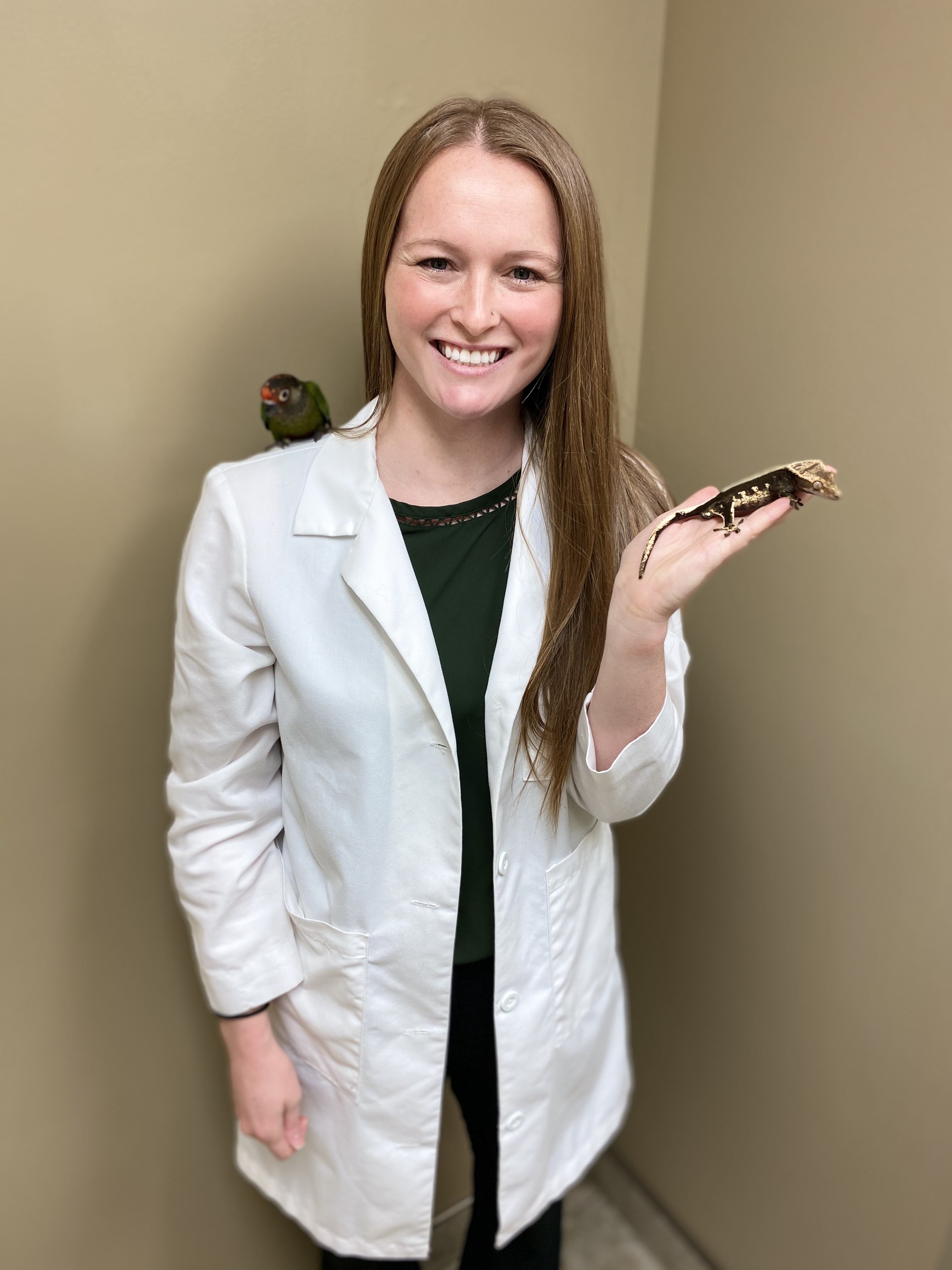 Dr. Heather Beasley graduated veterinary school from Michigan State University in 2020. She is a member of the Association of Avian Veterinarians (AAV) and completes continuing education routinely in order to stay up to date on medical advancements. In addition to canine and feline patients, Dr. Beasley especially enjoys treating reptiles and pocket pets. In her spare time, she enjoys playing soccer and spending time with her friends and family. 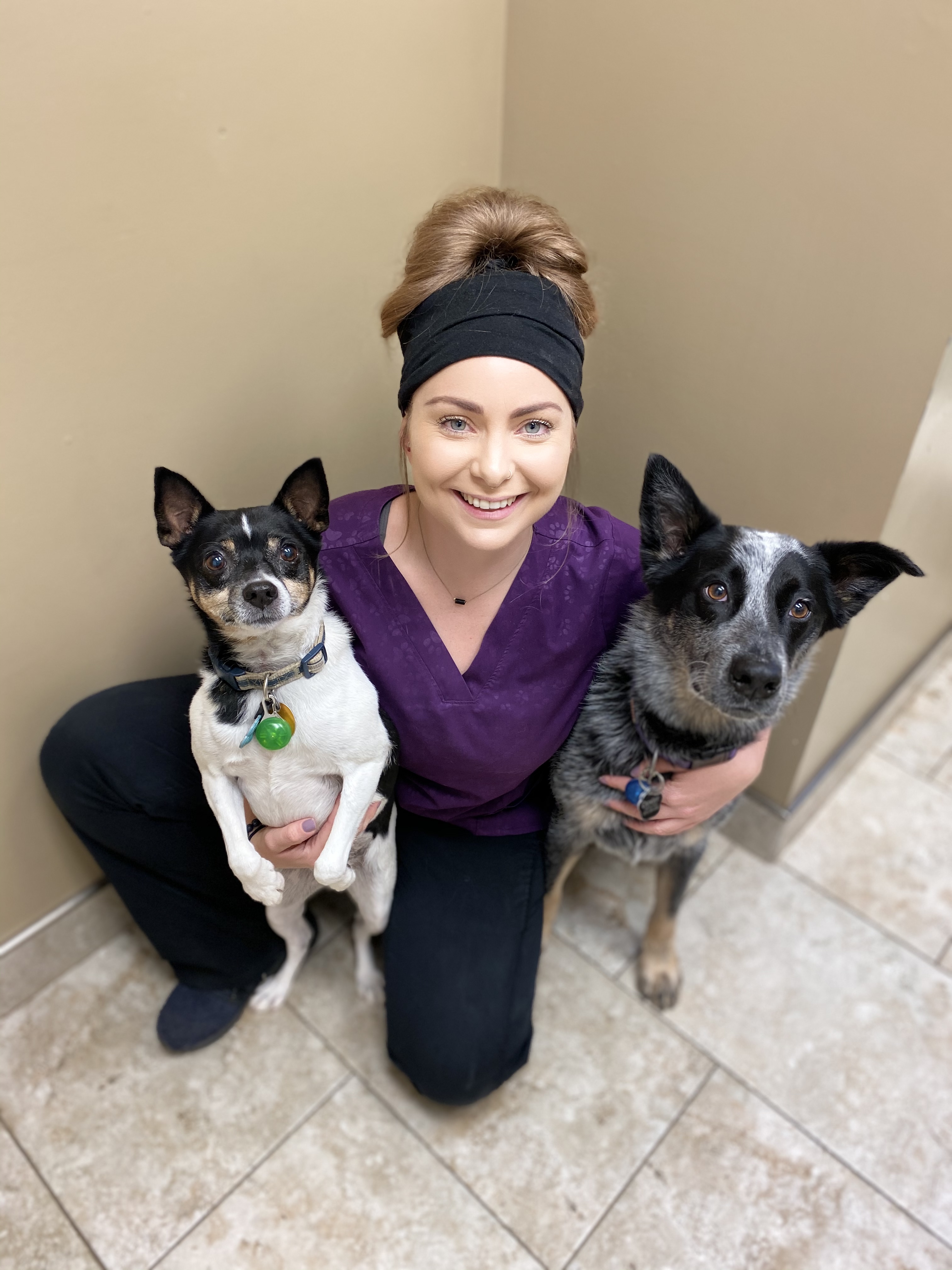 Kacie started working at Cedar Creek in December 2014. Kacie attended Michigan State University where she received her certificate of completion in Veterinary Technology from MSU and joined our staff as an Licensed Veterinary Technician in August 2017. Kacie enjoys spending free time with her family and her two dogs, Hahns and Dexter. 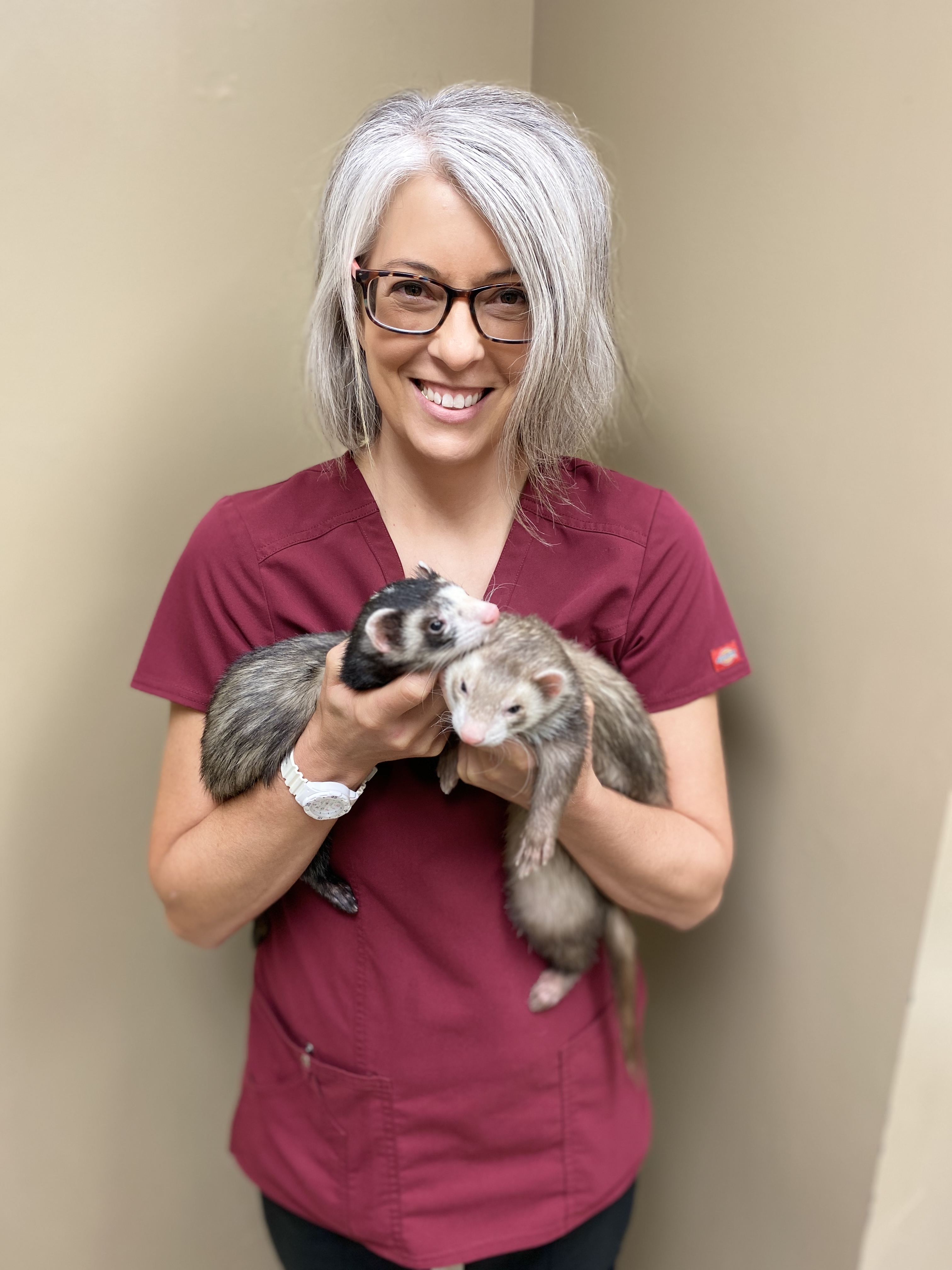 Tracy was Cedar Creek's first Licensed Veterinary Technician. She started at the clinic in 1992 as an assistant and earned her certificate of completion in Veterinary Technology from Michigan State University in 1995. Tracy worked at the clinic until 2002, then continued to do relief work at the clinic, and came back on staff in 2014. Tracy enjoys all aspects of the clinic, but has a special interest in dentistry and laser therapy. She has helped develop and maintain our laser therapy program and loves all of her 'laser babies'.  Tracy likes to attend continuing education to maintain her knowledge in veterinary medicine. She spends her free time with her husband, kids, and pets, which include a ferret-Rosco, and a hermit crab-Mr. Crab.

Maureen graduated from Michigan State University in August 2012 with a Bachelor's degree in Veterinary Technology. She began working for Cedar Creek as a licensed Vet Tech after graduating but has worked at the clinic since August 2011. She also has a Bachelors of Science in Zoology from MSU.  Maureen has interned at the Detroit Zoo in the National Amphibian Conservation Center and worked at Binder Park Zoo in their education department.  For two years, she also volunteered at Howell Nature Center Wildlife infirmary where she worked with a variety of Michigan wildlife.  She continues her education by attending conferences to keep up on veterinary medicine.  Maureen has 2 turtles at home, Peter and Atlas. 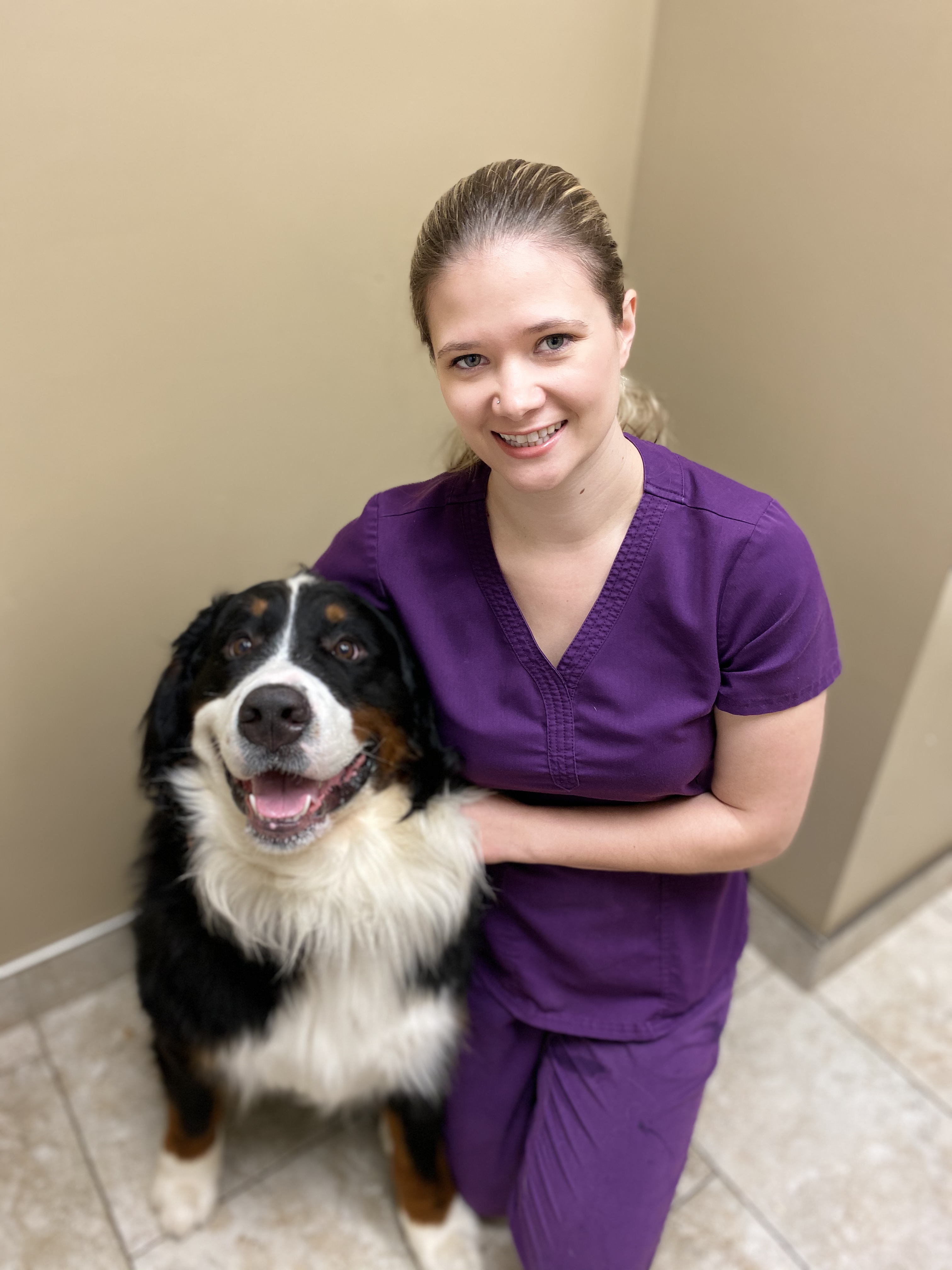 Stacy started working at Cedar Creek in September of 2019. She graduated from Michigan State University with a BS in Zoology in 2014 before deciding to return to MSU to obtain a certificate of completion in Veterinary Technology. Stacy enjoys spending time with her Bernese Mountain Dog named Baloo. 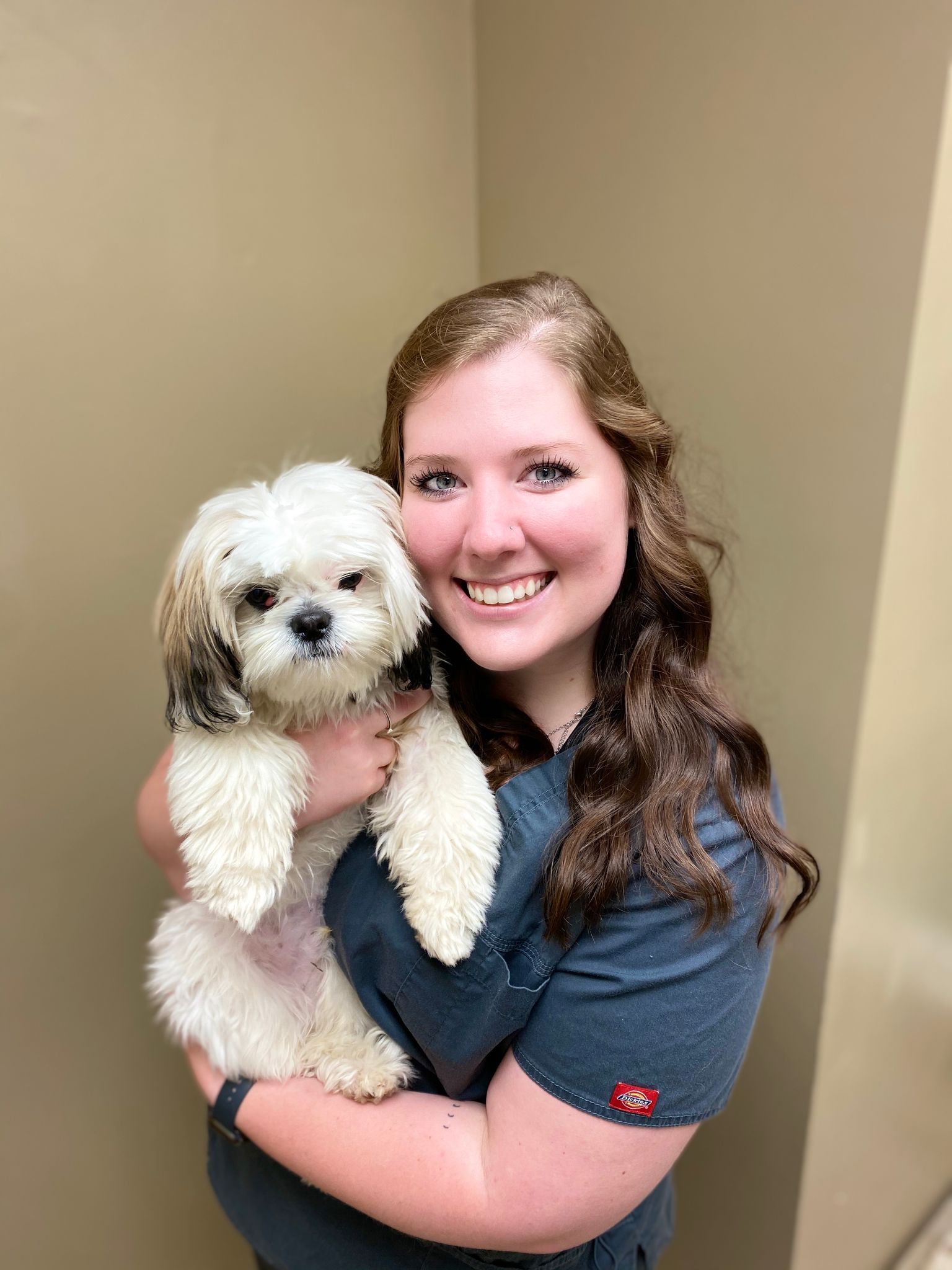 Becca started working at Cedar Creek in January of 2020 after graduating with her Bachelor's degree in Veterinary Technology from Michigan State University. In her free time, she enjoys cooking new recipes, baking desserts, and spending time with friends and family - especially outdoors. At home Becca cares for her Shih Tzu named Sully and a rabbit named Honey. 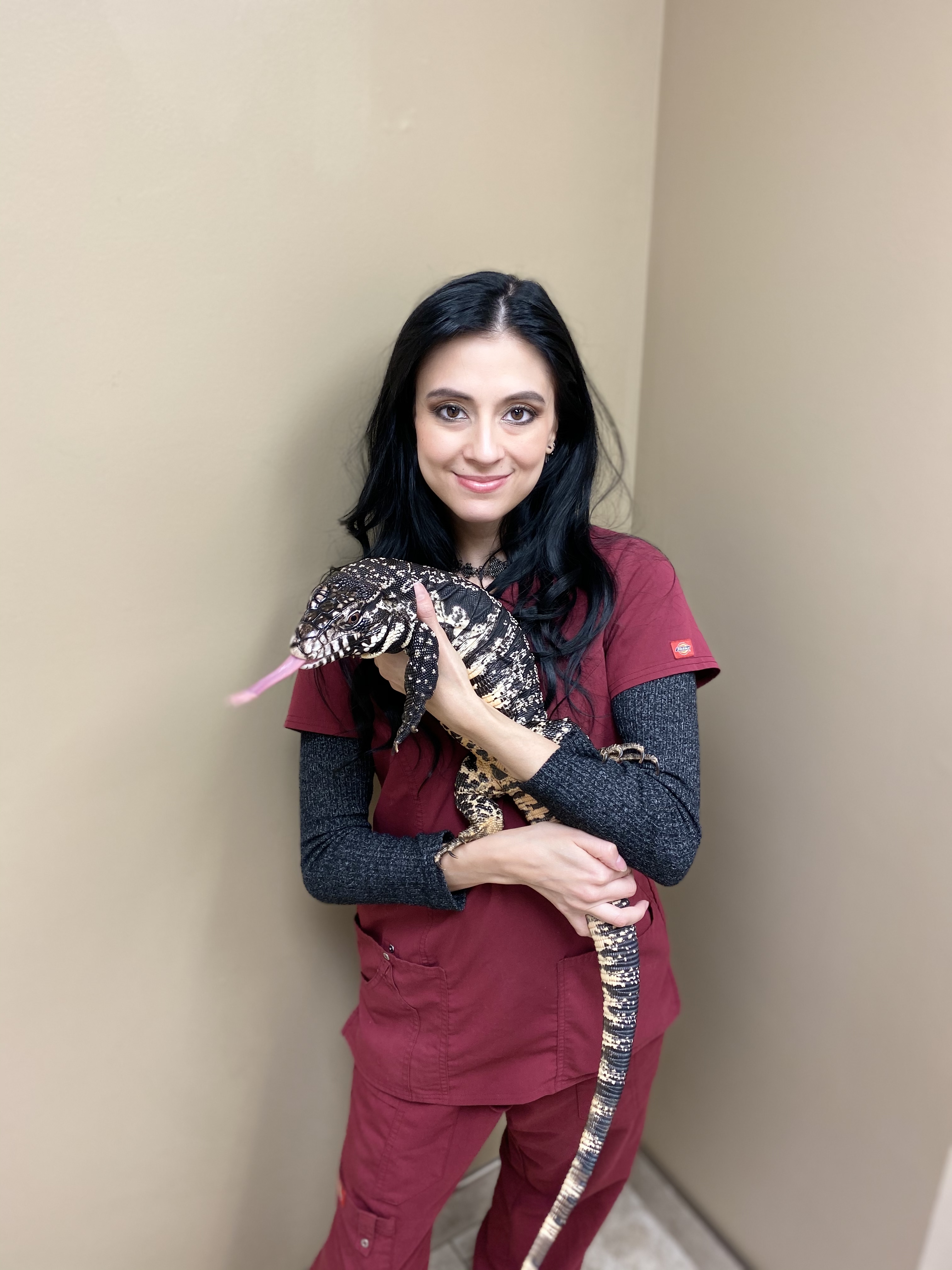 Melissa has been working at the clinic since July 2010. She has an Associate of Science in Biology and is currently enrolled in Penn Foster's Veterinary Technology program. Melissa loves cats, but her true passion lies in scaly creatures: she has several pet lizards and snakes, and is the go-to reptile expert of the clinic. Outside of the clinic, Melissa is an artist who loves drawing and painting (mostly animal subjects). 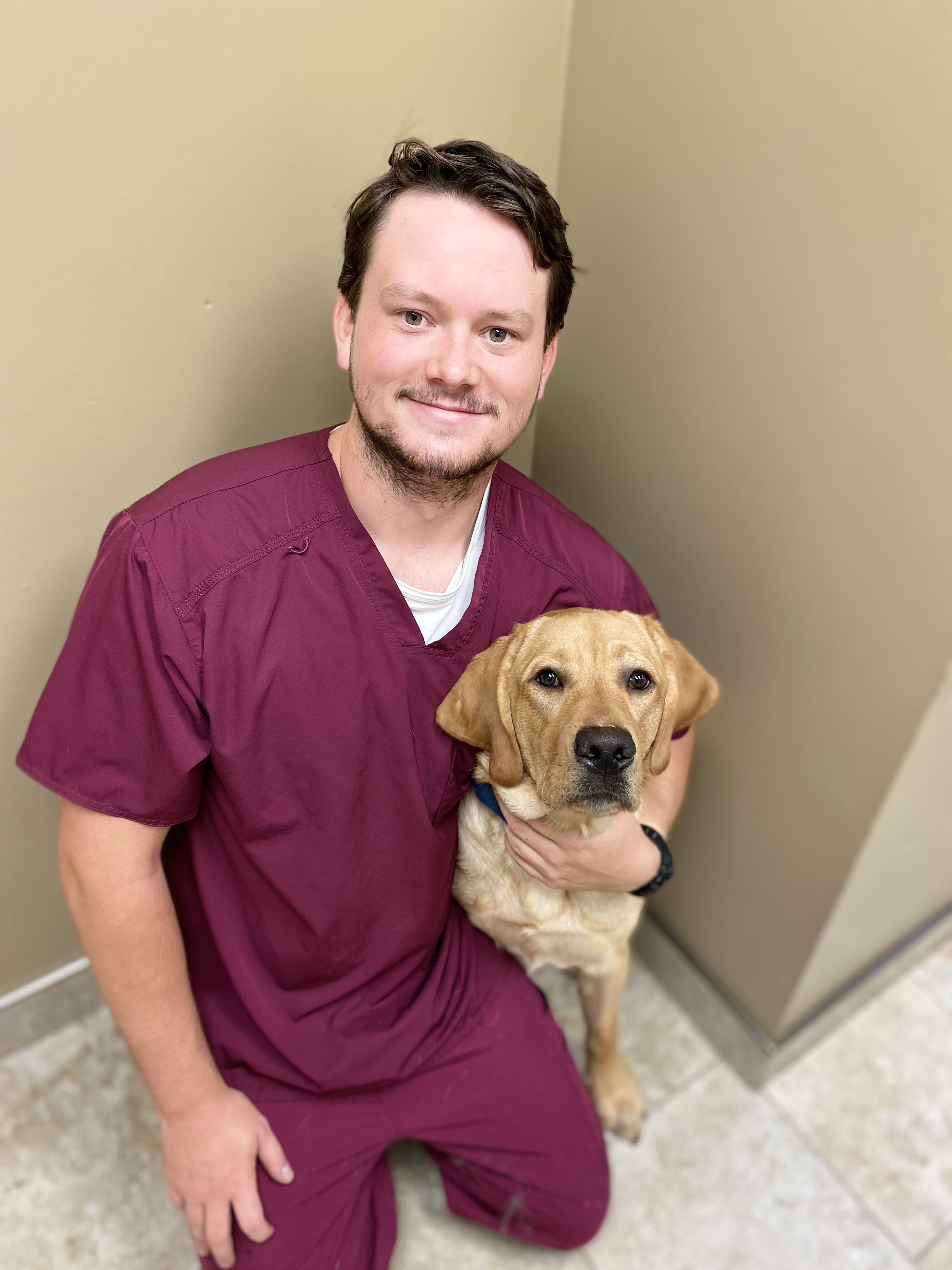 Jake started working at Cedar Creek in February of 2016. He is pursuing his DVM at Michigan State University as part of the 2023 class. Jake spends his free time hiking and camping. He really enjoys seeing all the different animals that come in on a daily basis. Jake has a lab named Fisher at home.

Angela joined our staff as a receptionist in December of 2015, and now helps out with assisting at the clinic. Angela is pursuing her DVM at Michigan State University in the class of 2022.  She is interested in wildlife and exotic medicine. At home, she has a Golden named Peach. 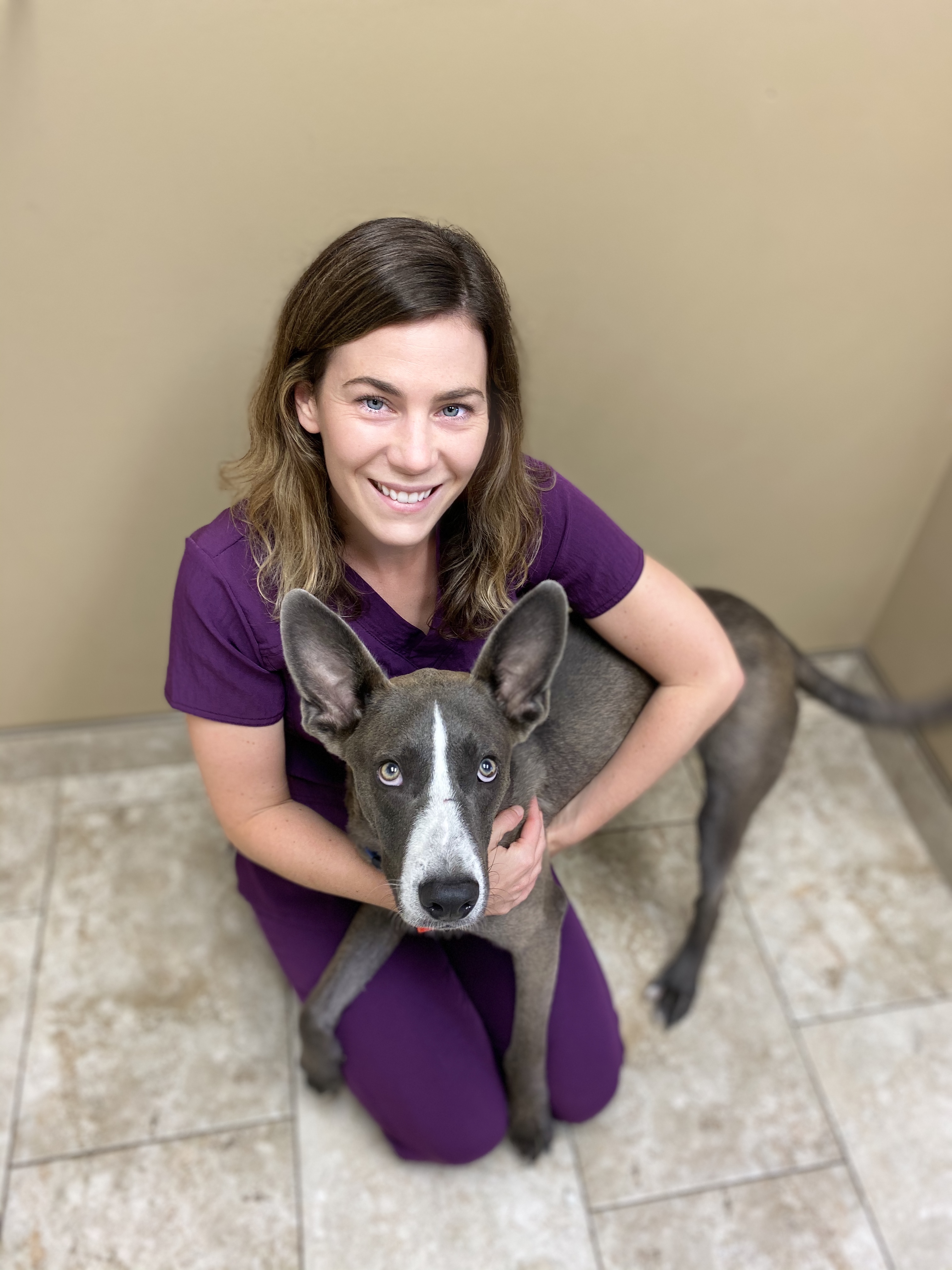 Megan started working at the clinic in August 2017. She graduated from Michigan State University with a Bachelor's degree in international relations and has worked on federal animal welfare policy. She is currently pursuing a certificate in Veterinary Technology at MSU. At home she has two dogs, Cash and Jupiter, and a cat named Catnik. In her spare time she enjoys practicing yoga, reading, and traveling. 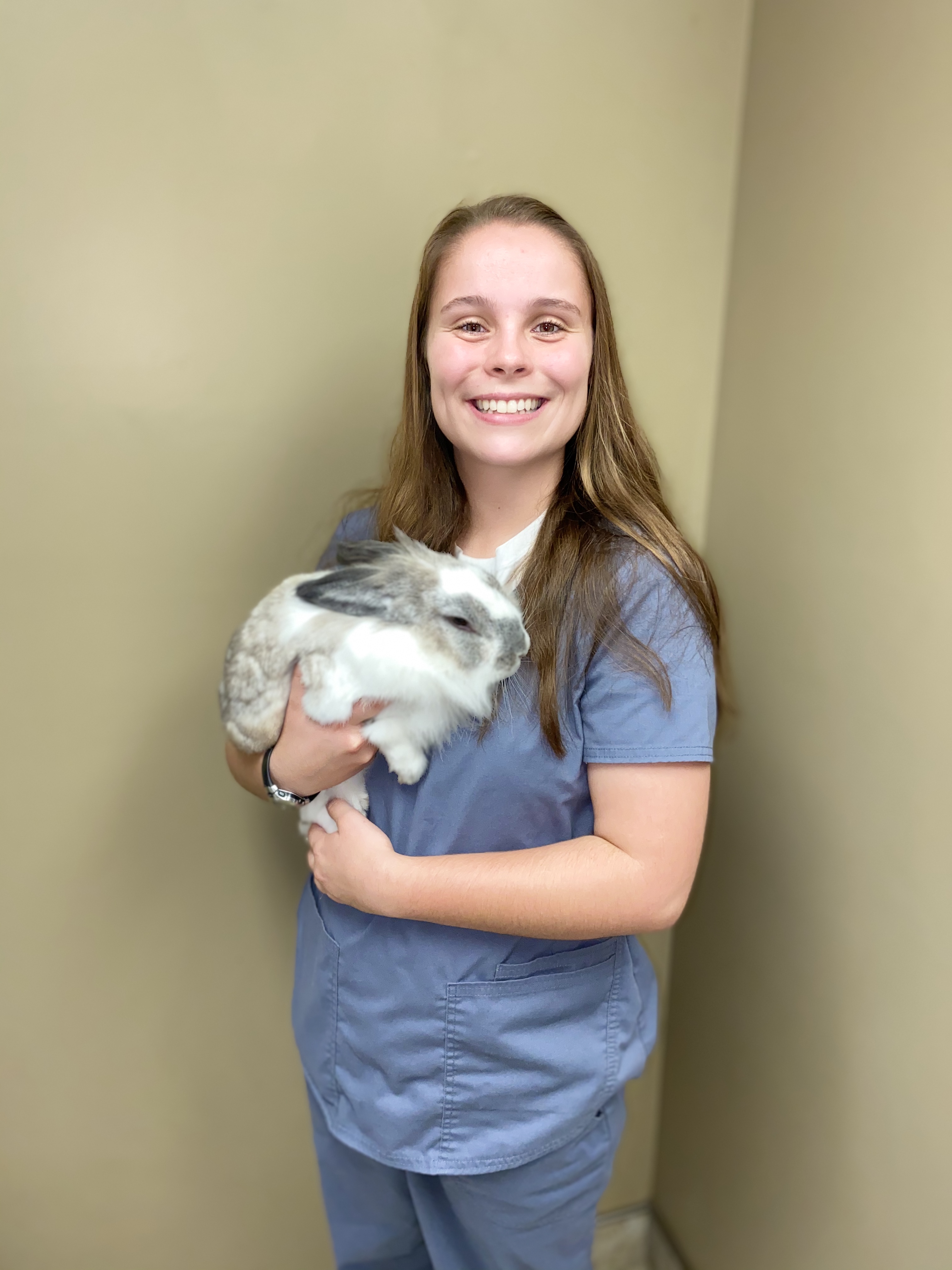 Diana started working at Cedar Creek in July 2019. Prior to joining the clinic team, she finished an internship at Potter Park Zoo and graduated from Michigan State University with a Bachelor's degree in Zoology. At home, she has a dog named Elena, two cats named Simon and Butters, and a rabbit named Ricochet. 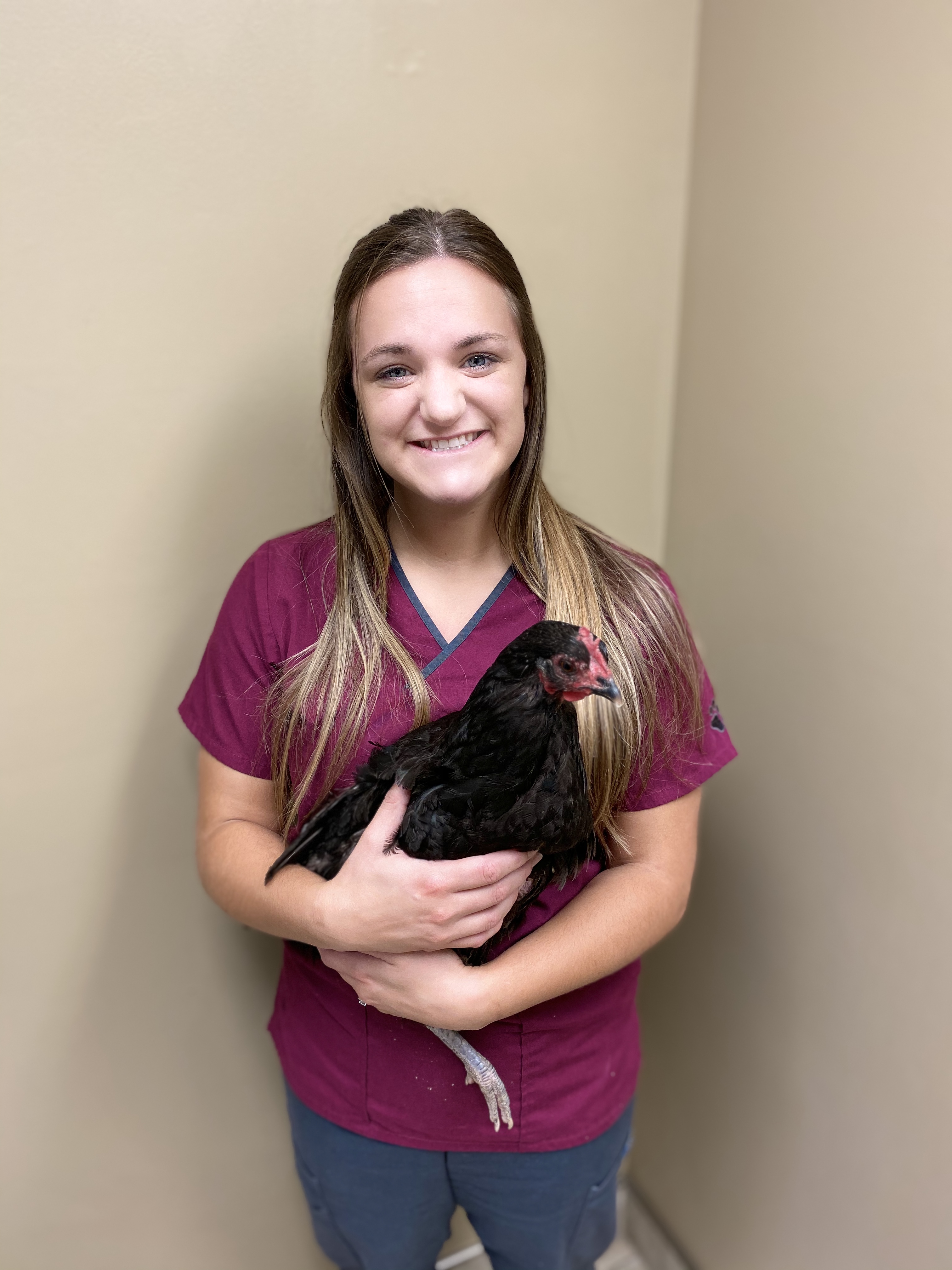 Angie joined Cedar Creek in July 2019. She graduated from MSU in May 2019 with a B.S. in Zoology with a concentration in Zoo and Aquatic Science. In her spare time, Angie coaches volleyball and serves as a nanny. She also enjoys playing sand volleyball and spending time with her family. At home, Angie has an 8-year-old rescue cat named Casey. 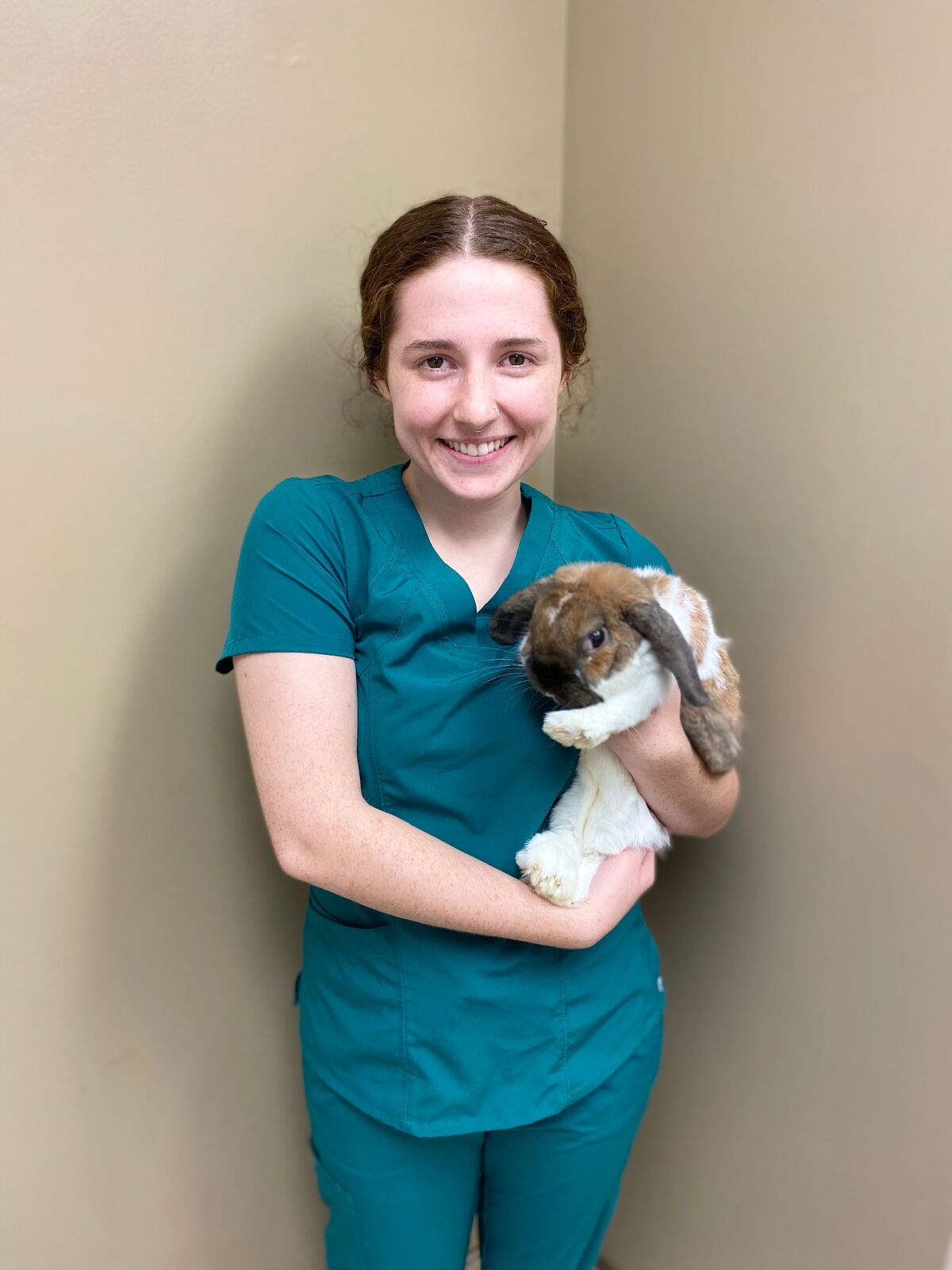 Serena joined Cedar Creek in April 2019. She recently received a degree in Animal Science with a concentration in Pre-Veterinary Medicine at MSU. She was a research assistant in MSU’s Animal Behavior and Welfare Group where she examines pig aggression to determine the link between social behavior and genetics. Serena’s interests include dog training, gardening, and mountain biking with her standard poodle, Astro. Her fur family also includes a rabbit named Tofu and four rats named Cedric, Darwin, Brutus, and Gunther. 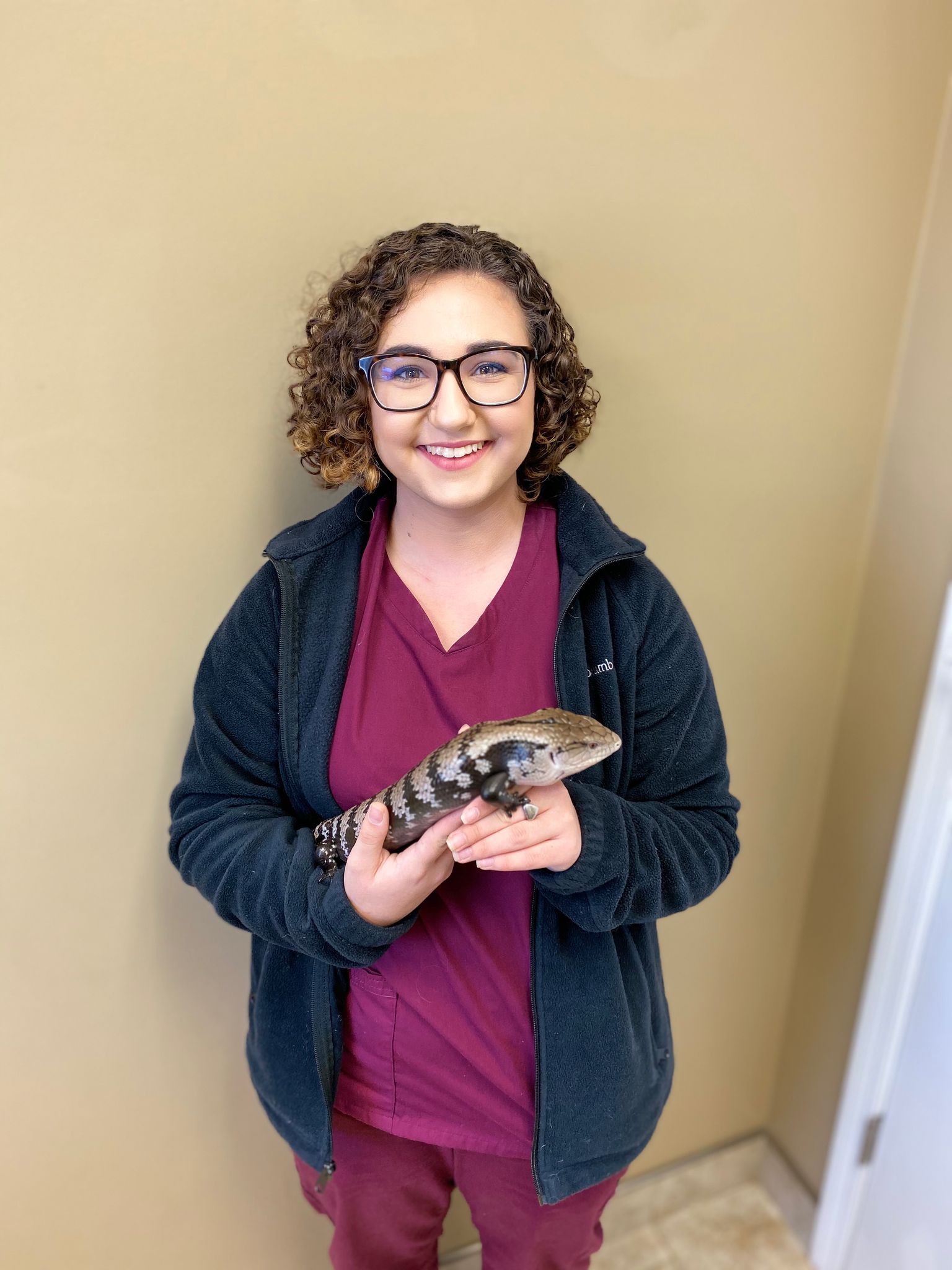 Amber started working at Cedar Creek in November of 2019. Prior to joining the clinic team, she was a supervisor, dog trainer, and groomer at a dog boarding facility and has been working with dogs for over 10 years as well as with exotic for 4 years. At home she has a dog named Molly, a blue tongue skink named Bindi, a leopard gecko named Rodger, a crested gecko named Pheobe, and two cats named Kali and Shadow. In her spare time she enjoys camping, fishing, kayaking and crafting. 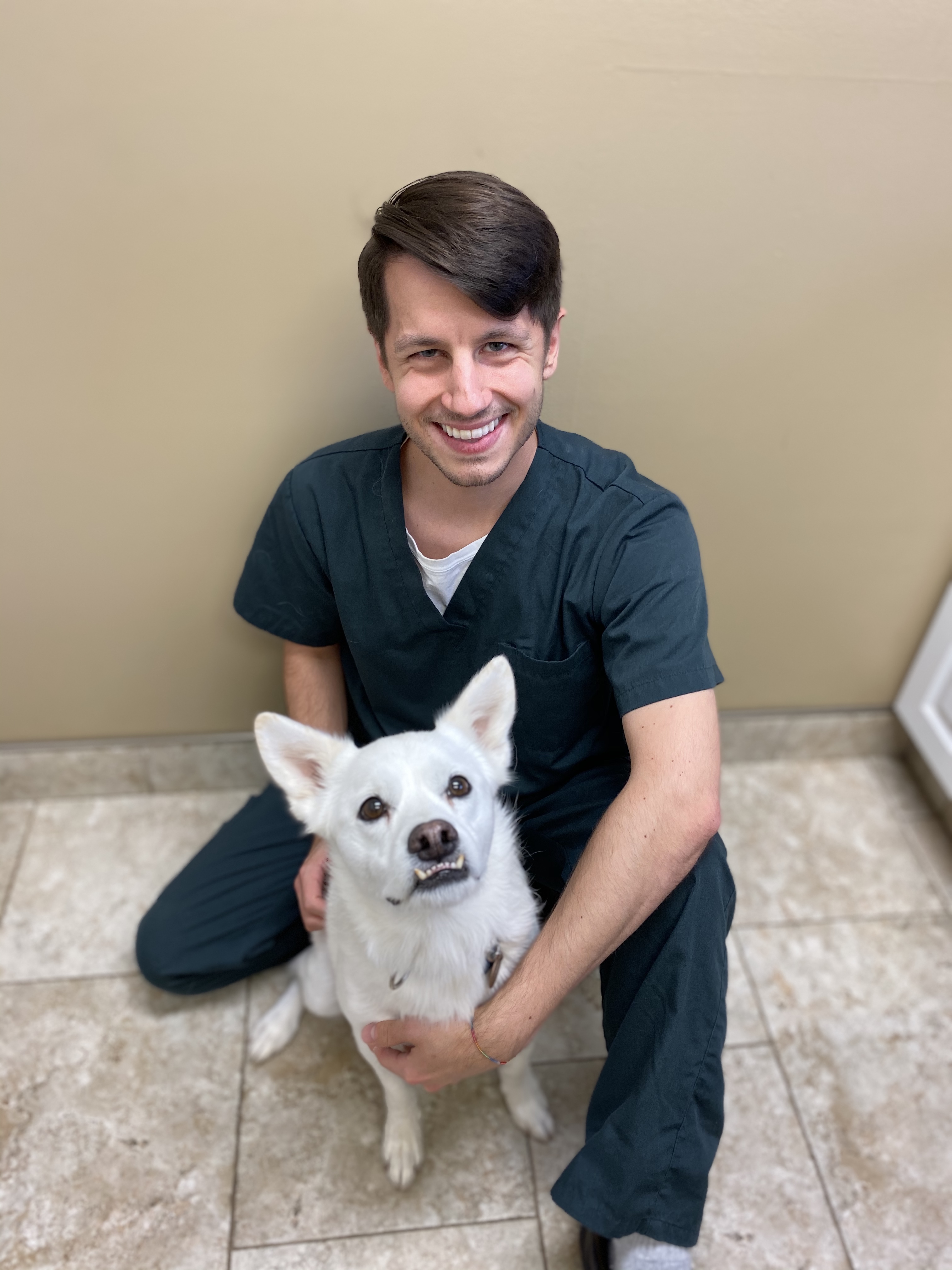 Nick started working at Cedar Creek in November 2017. Prior to joining the clinic, he graduated from Michigan State University with a B.A. in Anthropology and spent a few years working at an animal welfare nonprofit. In his spare time, he enjoys cooking and going for walks with his dogs, Cash and Jupiter. 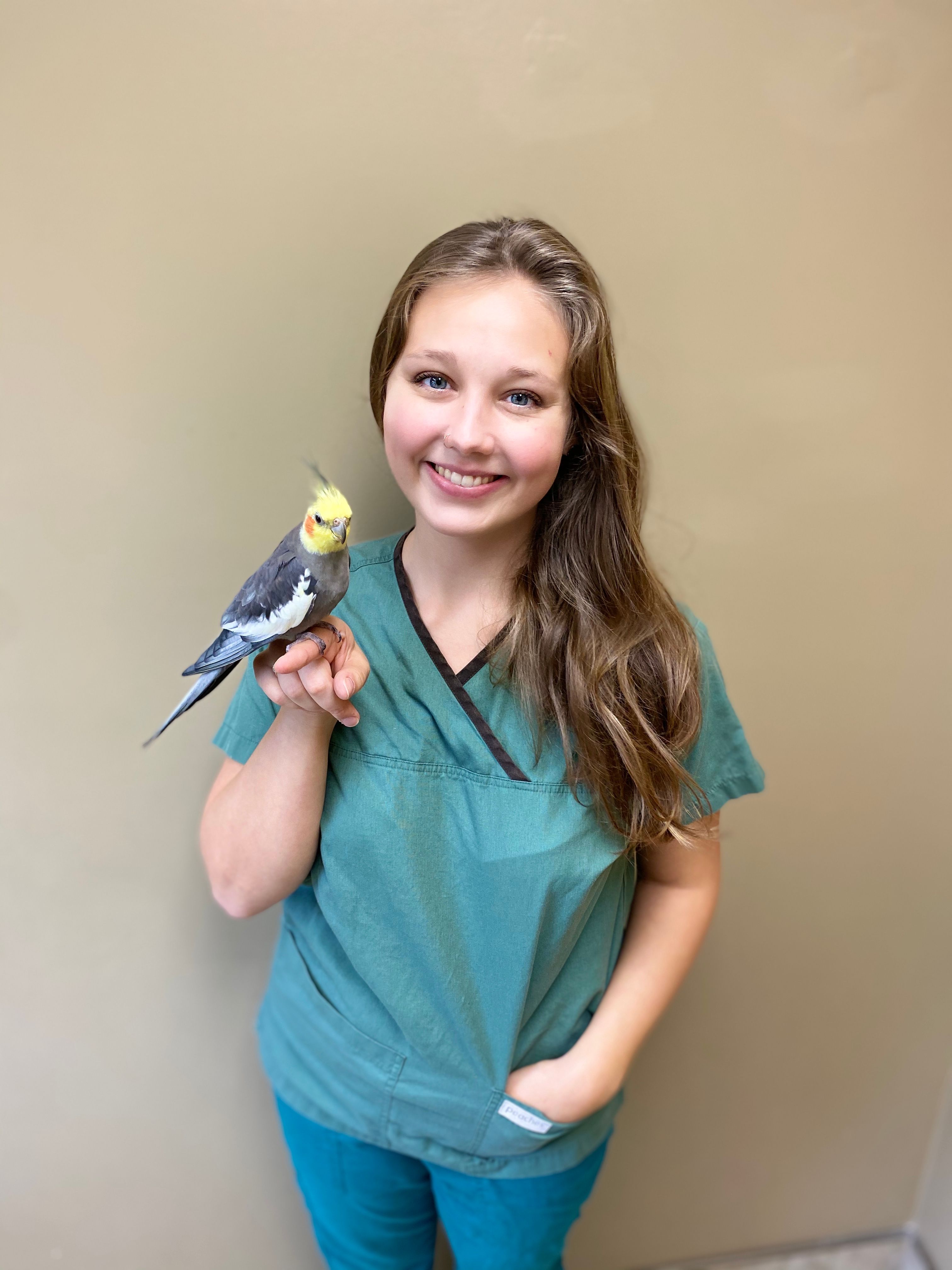 Sylvia started working at Cedar Creek in June, 2020. After earning a Bachelor's degree in Linguistics from the University of Iowa, she spent a year teaching English as a Second Language in Taiwan before moving to Michigan. In her spare time, she loves to read, cook, and care for her senior cockatiel, Peekaboo.